At the 2020 Geo Buiz Summit hosted by Geospatial Media held in Monterey California, leaders from geospatial companies around the world gathered to discuss the intersection of geo-related business and the “buzz” around new technologies. During the two-day summit, topics ranged from the latest in policy issues, to discussions of new technology and what innovations are still needed. While the focus of the conference was geospatial, there was content that was specifically designed to talk about the intersections of geospatial and AEC – specifically regarding the digitization of the design and construction industry.

Two back-to-back panels focused on the intersection of GEO and BIM – the potential for geospatial and BIM-related technology to revolutionize (or, depending on who you ask, to save) the AEC industry. Moderated by Nadine Alameh, CEO of the Open Geospatial Consortium, the first panel included Lisa Campbell, CMO and SVP of Business Strategy and Marketing at Autodesk, Andreas Gerster, VP of Global Construction BIM-CIM at Faro, Jims van Rens, the Senior VP and Riegl Group Special Advisor at Riegl USA, and Mark Schwartz, VP of Civil Construction Software Systems at Trimble.

Lisa Campbell of Autodesk shared her summary of the scope of the problem of efficiency and waste in construction by putting it in context of future urbanization.

“We’re basically going to double the number of people who are living in cities in the next thirty years. So, if you think about it – that took us nearly 6,000 years to get where we are today, and we are going to double that in another 30 years. That means about 200,000 people moving into cities every day – which means that the definition of city and urban area is probably going to change.”

Campbell emphasized that not only does the construction industry have to catch up with the surge in demand, but they also have to meet the demands of local and national governments and customers who care about quality, safety and sustainability. The only way to meet these demands are through more efficient workflows that can reduce waste, streamline building processes, and lessen mistakes that can lead to costly re-work.

“That’s why you’re seeing so much [technology] adoption happening in this space, because data underlies all of it. That’s where I see geospatial and BIM coming together as being so critical for customers, because you have to understand the context within which you’re building these assets,” said Campbell.

Bringing together BIM and geospatial information, as well as a host of other technological advances like machine learning and cloud processing of data have been coined the “Fourth Industrial Revolution” but there are some that think we are not quite at that level, especially in the construction industry.

Andreas Gerster at Faro has said that he thinks the construction industry is currently more near “version 1.2.” 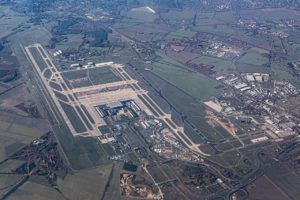 An aerial view of Berlin Brandenburg airport’s construction site. Originally planned to open in October 2011, the airport has encountered a series of delays and cost overruns, and has moved its targeted opening date to 2020.

“If you look at what we call the first three industrial revolutions: It’s the steam engine, automated manufacturing, and the IT revolution. From all those revolutions, the only thing that gave a push to the productivity in the construction industry is actually the invention of the steam engine. If you go to a modern construction site, it still looks like the old ancient construction area where they built their pyramids, with the addition of power.”

As an example, Gerster brought up an airport under construction in Berlin. According to Gerster the airport is on a schedule overrun of eight years, and the cost has more than doubled, and is now approximately 2 billion euros. It is common to hear about megaconstrutction projects suffering these kinds of overruns, only further illustrating the need to fix the core problems that are the root of these issues.

“I think it is fair to say that probably no other industry would accept thinks like that in terms of schedule and cost overrun,” added Gerstner.

So what will it take to bring the construction industry up to speed to meet these looming demands? One answer that has been put forth by companies like Bentley and Trimble is the idea of creating a digital twin – a regularly updated model that exists in 4D – in 3D and through time. As the model is adjusted to match reality, better decisions can be made on the job site because the plans are growing and changing with the project as obstacles come up.

Jims van Rens of Reigl, shared a hopeful example of what he envisions the future of construction would look like with the help of digital twins. Citing the Tampa airport renovations as an example, he described the 40-acre worksite as one that would be challenging for any site supervisor to manage. So instead of the site supervisor leaving the trailer and only being able to cover a small portion of the site, they have implemented a drone surveying program that captures the site on a regular basis to share information with key stakeholders.

“Now [a supervisor] gets a complete video overview of what’s taking place on that project several times a week. That overview is being shared, along with other information, with all of the other subcontractors and everybody else on job site, including the airport authority so everyone knows what’s happening,” says van Rens.

“So now they are being able to facilitate the information, widely and broadly, and it’s led to what the contractor reporting that they have gained one day a month on the schedule, utilizing these new methods. So, just a exciting glimpse of the future.”

Gerster agreed, and added that digital twins and 4D models can help to prevent common problems from occurring, and other existing technologies can also help to reduce rework.

The Interoperability Barrier – Time for A New Format?

While digital twins and better scanning technology are definitely on the way, there’s a critical barrier that still needs to be overcome before the AEC industry can truly see these promised technological gains. Between the computing power needed to process the massive amounts of data that are being collected to even broader problems of data integrity, interoperability and longevity, there are a lot of obstacles that are currently slowing adoption and efficiency gains. For Trimble, Mark Schwartz says that these challenges present for everyone in the space.

“As a technology provider – one of the challenges it the sheer amount of data that’s being created now in the field – and the industry and the backend systems are not yet equipped to handle the challenge.”

“That technology and this fight – it is emblematic of what’s happened in geospatial over the last 10 years. The software is there, the hardware is there, everything’s ready, we’ve just got some obstacles we need to work together on.”

Schwartz pointed to the obvious investment boom that’s happening because of the market’s potential size, but that investing in many different small solutions can contribute to a greater problem, which is making all of those systems work together. It is a tricky problem without a single clear solution, and he commented that thinking about thep roblem keeps him up at night.

“It’s making it harder for people like us because we’ve been labeled an industry ‘consolidator’ as have Autodesk and some others, because these pint solution are coming out at a rapid pace, and creating more data – and our customers are looking at us to bring that data together. That’s the challenge we face every day.”

For Jims van Rens, the problem is even more fundamental, but deep: the primary filetype used by geospatial data – LAS – is old, and it can’t keep up with all of the new cameras and scanning systems that are available without losing some of the data that is being collected. He pointed out that beyond trying to make different systems talk to each other, there is a need to create an entire different filetype.

“We need a new data format that covers all the different instrumentation so that we can take the data into your software packages, pull them in, and then apply machine learning and other aspects to that, to be able to extract the truths of it. It is time for us to bust through that barrier.”

The next transformation – which will have less to do with hardware and more with software, filetypes and processing – is on its way. Van Rens agreed in one of his closing comments.

“That technology and this fight – it is emblematic of what’s happened in geospatial over the last 10 years. The software is there, the hardware is there, everything’s ready, we’ve just got some obstacles we need to work together on.”