There has been some recent buzz about the ability to 3D print homes or large-scale architectural structures, including the recent challenge from NASA to create a 3D-printed habitat designed for life on Mars. But there’s another innovation – made possible by artificial intelligence – that may arrive sooner than large-scale 3D printing: 3D folding.

Foldstruct is a startup company that has pursued a path to alternative ways of designing and fabricating construction projects, through the process of computational and parametric design. The goal is to be able to create processes to create beautiful, functional 3D architectural pieces and bespoke designs by incorporating intelligence to help make decisions that inform fabrication.

There can sometimes be a disconnect between the design vision of an architect and the practicalities of construction and fabrication, as Foldstruct CEO Tal Friedman recalls. He found that he could use all kinds of digital tools to create beautiful architectural shapes, but once they were presented to engineers and fabricators, the designs would be reduced to more basic shapes due to manufacturing and material limits.

“It was like being asked, ‘how do you want your cube?’” Friedman joked.

At Foldstruct, Friedman has set out to create a more wholistic approach to solving not just design challenges but finding out how to innovate in the fabrication part of construction as well.

“The problem is not in the design phase, we can solve that, and the computer now tolerates anything – almost more than we can give it. But we’re actually lagging behind because the fabrication aspect is still sitting there unchanged.”

As a result, Foldstruct has pursued the use of computational and parametric design. When complex structures are called for, the facets of the design (e.g., each face of a folded, origami-like shape) do not need to be individually modeled, but can be optimized by the computer’s output. 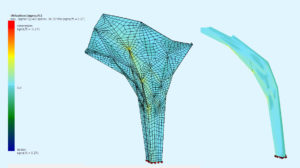 One of the first large-scale projects to use this approach, was an Origami-inspired pavilion that was created out of folded aluminum panels, and is self-supporting. After initial prototyping and experimentation with folding techniques, algorithms were programmed to help to calculate options for the structure based on its fabrication constraints. The design was driven by the fabrication, but the ability for innovation was maintained. The fabrication method used – folding the rigid panels in a specific order also resembles Origami, where folds make up the joints rather than seams or welds.

In this project, each of the “flowers” was made of four unique sections that were folded into position. Each piece contains up to 20 interconnected surfaces – which would have taken far longer to fabricate if each piece had to be individually attached.  This process also reduces the overall weight, with thin pieces of material having the ability to be structurally robust. Foldstruct posits that this particular method may have potential for use in architecture and shading systems, and also in the creation of creative, yet lightweight facades. 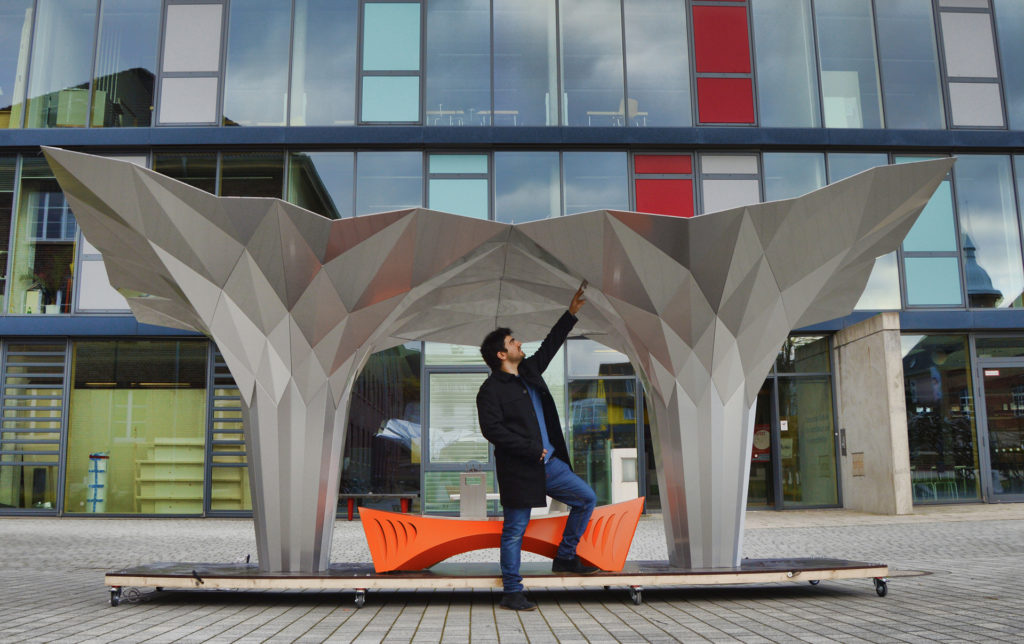 The minimal use of materials, and the labor-efficient construction methods may help to reduce the cost of creating iconic building designs in the future.

According to Foldstruct, this technique and technology “allows developers to build iconic designs for feasible budgets.” Adding that “Any standard cube can now make a real impact and stand out from the crowd.”

Foldstruct’s designs are driven by the desire to create beautiful, but cost-effective and energy-efficient designs. Using their algorithms and folding fabrication methods, they hope that they can change the way that designers think about buildings.

Foldstruct’s mission reads: “Foldstruct’s mission is to free architecture from cubical repetitiveness and allow freeform for the masses, and not for the rich only. We want to change the way streets look, and treat every building as an icon waiting to happen.”