When construction sites are not captured and digitized while construction is in progress, there can be unforeseen and time-consuming impacts, especially when contractors are trying check their work. Automation and robotics startup Scaled Robotics is bringing automation to reality capture specifically geared towards construction that is in progress. Their automatic robot-mounted progress monitoring system can take what once used to be an imprecise task and turn it into a value-added dataset that helps workers to prioritize tasks, work smarter, and reduce re-work.

Addressing the digital disconnect on the construction site

The need for this type of technology is clear and addresses a crucial pain point in the construction process. While there have been huge advances in the modeling and design ends of construction, there is still a gap between the office and the field, says Scaled Robotics CEO Stuart Maggs.

“Essentially the problem we are trying to solve is that whilst we are mostly designing digitally, we’re still constructing manually.”

Maggs detailed a typical scenario he’d recently seen where existing tools – especially across large jobsites – simply don’t provide enough information. At a jobsite, the general contractor wanted to check if all the ducts in the ceiling were installed above 2 meters as specified by the plans. Without scans, they had to try to get the answer by walking around with a 2-meter-tall stick, walking around and stopping when it hit something lower than the 2 meter mark.

“People have developed tools to be able to solve this problem with laser measures or tape measures or rulers, but you just can’t do that for 100,000 elements in a building – it is not scalable or possible.”

The concept of Scaled Robotics was born out of the growing frustration of not having the tools available to build what was designed in the office. Scaled Robotics aims to bridge this gap between the digital and the physical world by automating progress monitoring. Rather than having a general contractor checking a representative sample of elements, the automated monitoring can look at all of the elements at once.

Getting to actionable information, quickly

The robot, which is a low to the ground 4-wheeled vehicle about the size of a small ATV, can be deployed into areas where data need to be captured. It can be either manually driven with a controller, or taught to follow a path to capture the needed information. It automatically avoids obstacles, people, holes in the ground and other construction hazards.

“Everyone gets obsessed with the robot, which is pretty cool, but ultimately it is just a device to capture high frequency information… the real value is being derived by the software platform.”

Once the data is captured, it is processed by Scaled Robotics’ software platform and is uploaded to the cloud. The data is then automatically processed and compared with the BIM, comparing what was intended to be built to what the robot was able to capture. The software can also take in data from more traditional laser scanners as well, providing even more inputs.

The software then uses machine learning and computer vision algorithms to analyze it, and then it is delivered in a web-based front end viewer that provides the user with actionable information. The user is getting more than just raw capture data – it can be searched, queried or manipulated to provide easy-to-understand information. The different layers of analysis can be used to produce high frequency information that improves decision making.

Maggs described the type of analysis the system can provide when working on a complex jobsite with high tolerances. On the first day that they captured information at the jobsite, they uploaded and analyzed every element within the floor that they scanned, and the system produced a report of every element and whether it was in or out of tolerance. This can be displayed as a list, but also visualized with color-coding to bring out of tolerance elements to the attention of anyone looking at the application. The information is also searchable and sortable, which meant that they could also rank them by the magnitude of the deviation. The highest risk elements at the top, with more trivial issues at the list. Within a few minutes, the system essentially produced an intelligent “punch list” that could then dictate what needed to be immediately corrected. 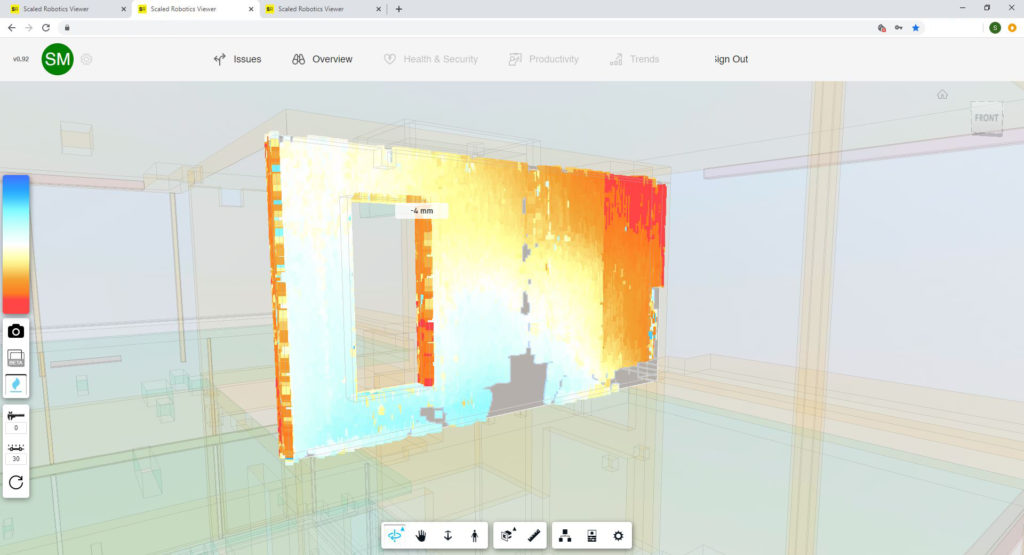 The ‘heatmap’ function can help contractors to pinpoint the areas that are the most out of spec.

On that particular job, they there was even a wall that was 10 centimeters away from where it should have been, and it was a wall that would have had services behind it. This prevented a cascade of problems, says Maggs.

“If they had waited four or five months down the line, when the schedule said they would have to put the services in, the problem would have come up and cost thousands of Euros in extra costs, and days of delay to the schedule, not to mention all of these ricocheting downstream problems.” 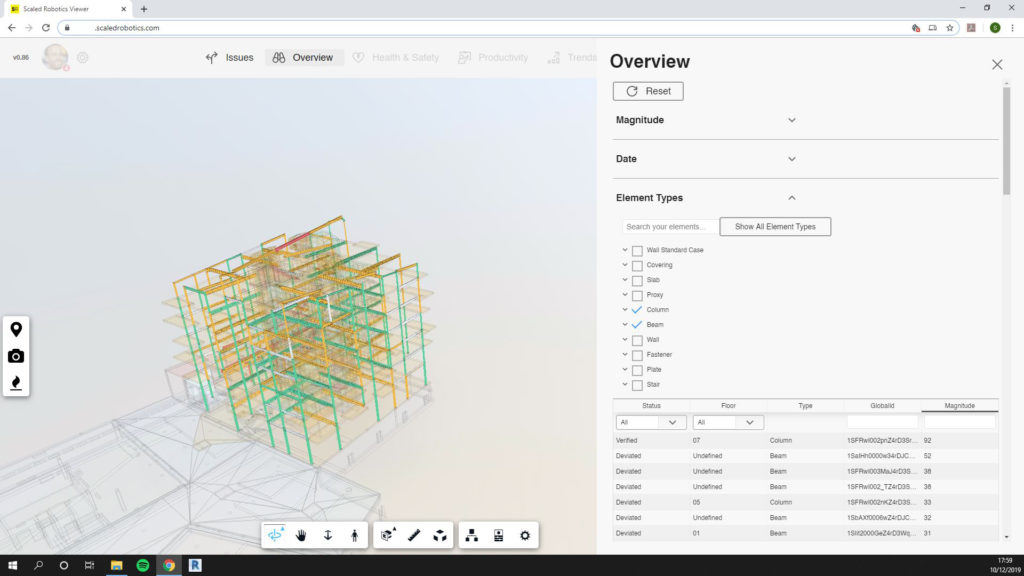 A visualization of elements in (green) or out of spec (yellows and reds) and a list sorted from most to least deviated.

Tackling the challenge of adoption

Of course, this type of savings and benefit is only available if the technology is adopted and embraced as part of the everyday workflow. Scaled Robotics has worked with a variety of stakeholders to streamline the software and its outputs to have a very low learning curve.

The front end software is built on Forge, which is Autodesk’s API, and may be a familiar environment for people already familiar with programs in Autodesk’s portfolio. Scaled Robotics has also put a lot of work into the user interface and experience, with the goal of making the software as easy to use as possible. They want people to be able to learn it in ten to fifteen minutes, and without an instruction manual.

“Where Facebook wants to suck you in and make you spend your whole day on Facebook so they can monetize you, we want the opposite. We want you to spend the least amount of time on our software and get your information as quickly as possible, then go to other places to solve the problem,” says Maggs.

On the robot side, they’ve also used a controller that is based on the PlayStation controller, which is already designed to be intuitive, and may be familiar to some of its users. The clear controls are even easy to use with gloves on, or in the cold. 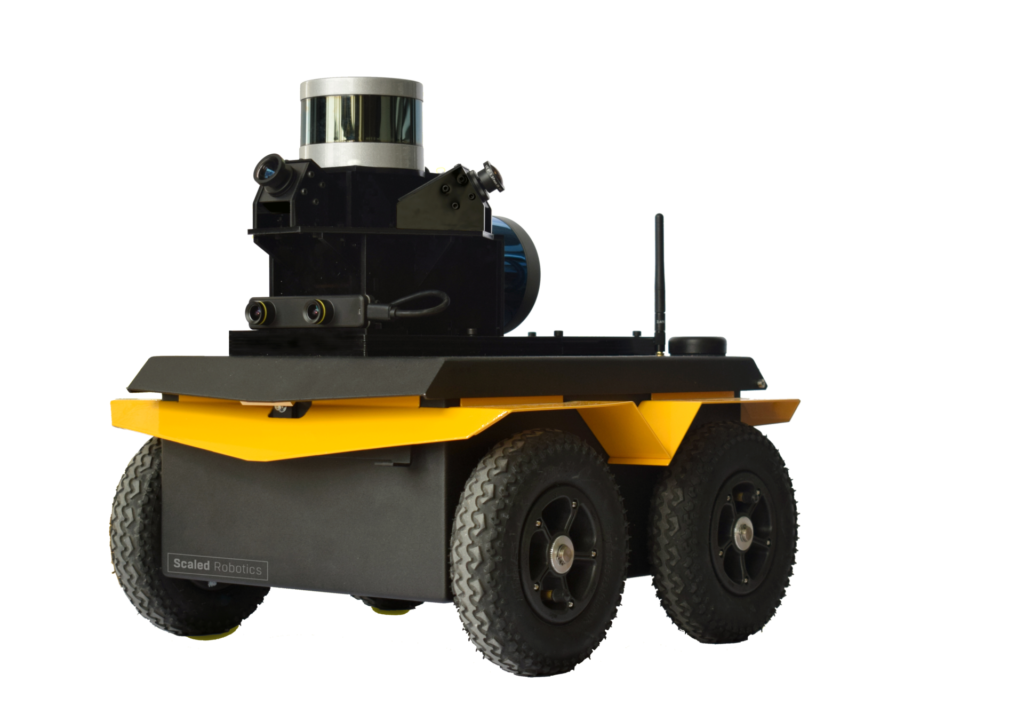 The robot can be equipped with a variety of scanners and can follow programmed pathways through a construction site autonomously.

The feedback to the robot appearing on a jobsite has been varied. There have been some people very excited to use the robot to do what used to be a mundane and repetitive task, and some are more hesitant. Maggs says that while there hasn’t been any overt backlash or strongly negative responses, that doesn’t mean they are planning to be complacent.

Fears of being ‘replaced’ by robots and automation are in the back of many minds, and it is important to keep a dialogue open, says Maggs. Often, he’ll take the technology out of the equation when having initial conversations, asking potential clients what information they would like to know, and often they don’t have the manpower to collect that kind of data themselves.

“So you end up saying, ‘Look, I have this piece of technology that can get that information for you. Is that something you’re interested in?’ And once you frame it in that way – that’s less confrontational you get a far higher level of adoption to the technology.”

With a PlayStation controller and the latest technology, one could imagine that the technology would only be more easily embraced by younger workers on the job site.

“Honestly it has not been like that – there have been people from every generation that have been really enthusiastic about what we’re doing. That has played a huge role in the success we’ve had so far in pushing all of this forward on their construction sites.”

Scaled Robotics has several partners that are currently putting their robots to work in the field. They’ve already begun working with KIER, a UK construction and infrastructure services company, Dura Vermeer, a construction engineering company in the Netherlands, Norway-based civil engineering and construction company AF Gruppen, and Besix, a Belgian construction group.

Going forward, Scaled Robotics is looking for more partners and are seeking companies who want to start digitizing and changing their construction work flows, and Maggs urged any interested companies to email info@scaledrobotics.com to connect.